The Ones Who Have Gone Before Us 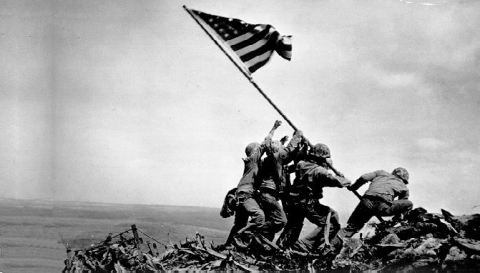 We are called into a lifestyle of taking new ground.

Lately I have been spending time at work helping train others. Some of the things I need to train them on are things that I had to learn for myself. I was dwelling on this today and realized this is the life we are supposed to live. We are called into a lifestyle of taking new ground so that others may come up behind and carry the baton even further.

We all have those who have gone before us that have helped paved the way for us to be who we are and where we are today. Our country exists because of those who have laid the sacrifice before us. In the picture above, only two of the five lived a week after it was taken. They claimed new ground that others may exceed where they had been.

Older brothers show us what can be accomplished.

Our goal in walking with Jesus is not to make spiritual superheros, but find those who have exceeded in taking new ground then follow their example to take it to new heights. George Müller was known for being a man who God answered his prayers. Therefore let’s find out what he did and apply it. The Moravians set up 24/7 prayer virgils that ran for 100 years and spawned hundreds of missionaries around the globe – the first large scale Protestant missionary movement. Let’s look to them to see how to recreate that type of spiritual movement.

Personally, I am very thankful for Dr. Bill Bright for his life and message. He carried the baton forward on Transferable Concepts, Fasting and Prayer, and First Love. Each of these has been sturdy footholds in my climb up the mountain of God. A.W. Tozer is another man that has helped me advance further up especially his Pursuit of God book.

Going after all that Jesus died for us to attain

Let us also remember that Jesus is our older brother. “I tell you the truth, anyone who has faith in me will do what I have been doing. He will do even greater things than these, because I am going to the Father” (John 14:12). We are to worship Him, but we are not to set His life on earth as unattainable for His followers today. He has called us to greater things than we can even ask or imagine (Ephesians 3:20). Do you feel like you have attained all that Jesus died for you to receive? If not, look to those who have attained more and learn from them and see what they did as camps to be reached and then moved out from.

Thanks for today 's coaching, always on point. God continue to bless you to be a blessing to us your readers.