A Simple Statement of Faith That Will Free You From Religion - prayer coach
Prayer Coach Prayer Coach : prayer guides : personal prayers : What I Believe 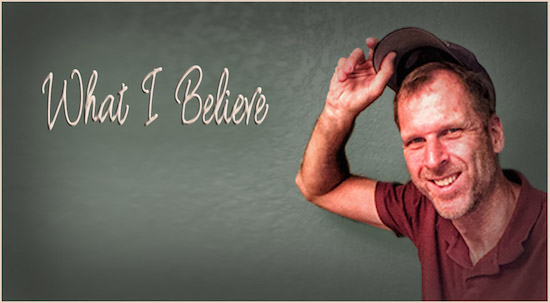 Continue to Send Me Your Questions and Comments

I appreciate all of the emails and comments I have received from the community here. They give me a place to hear from you and know what you are going through. Many of you are going through such hard problems, but it makes me happy and humbled to see you continue to cling to God in the midst of them. I just want to continue to cheer you on in the process of going after God.

My Aversions to Statements of Faith

Every once in awhile I get asked for a statement of faith. I always feel like they are trying to put me in their box. I feel they are looking for a denomination or seminary or some belief in the end times that they can either agree or disagree with. I just want to tell them my goal is simply to help us all love God more.

My aversion to creeds is because they get so formal and are sometimes used to say why I’m different than you. But, I also know what we believe is important.

If you are thinking about joining a church and you may want to check if they believe infant baptism if this is something you want. Maybe you strongly believe against any form of alcohol, but they use it in communion. I understand statements of faith can be helpful.

My Aversion Is More My Problem

This week I got another such request. It was very kind and considerate, and I found myself giving a longer than normal answer. As I wrote, I thought my feelings toward statements of faith are abnormally strong, so I started considering to put one up.

This person response back encouraged these feelings more. She shared how people had deceived her in the past because they hid their true beliefs. They may say they believe in Jesus like you, but find out later that they think you can also be a god like Jesus. Or, they may say they believe in the Bible, but then find out they think man changed the Bible, so God gave us another special book.

While I was not wanting to be put in a denomination because I want Christians to just get along, others really wanted to know what I believe because there are those who want to deceive you.

There Are People Who Try to Deceive

The same day I got this email, I also got an email from another person. She told me how she had gone to someone to get prayer. He told her that God was mad at her for something bad she did and now He couldn’t even hear her prayers. I don’t know anything about her life. Maybe she had done bad things. But now she is seeking a connection with God, and she is told it is unavailable to her. Jesus’ died on the cross for all sin, except hers.

I write in order to help people like her know God does want to connect with her. Nothing will ever separate her from His love. No one can ever remove her from the palm of His hand. She can run to Him and be safe.

So for the growing community that gave me their confidence by following this blog and for those that need to hear God is for them, here is what I believe.

A Simple Statement of Faith That Will Free You From Religion

I’m sure there are other things I believe, but this seems like the important stuff. Please keep the questions and comments coming. I enjoy connecting with you.

6 thoughts on “What I Believe”

I am grateful for your teachings on prayer.