4 Clues You May Be Religious About Worship 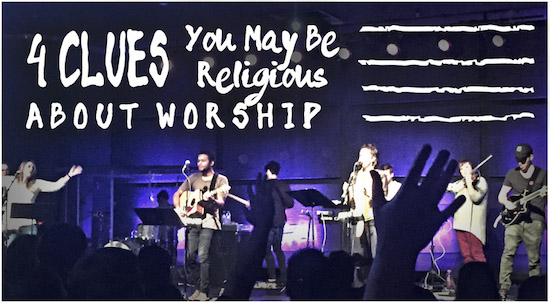 Many years ago I helped run college services where we provided worship and hosted spiritual talks. There was one meeting in particular where the worship was very enjoyable to the point where some of the worship leaders went to their knees and faces to the ground. It was unusual to watch.

At the next leaders meeting, this service became a topic of discussion. The worship leaders were nicely discouraged from ever doing that again. They could worship like that in private, but we needed them on their feet at our meetings. We didn’t want to have them to draw attention to their worship.

During those conversations, I was giving my support to the restrictions. It may have been the right decision for that group, but I was thinking about this today because I realize how often true worship is misunderstood among the religious. Here are four clues from the Bible that show if you may be religious about worship:

When the disciples were filled with the Holy Spirit on Pentecost, they were gathered together in one place. The Holy Spirit came on them and they started speaking in tongues, which was described as declarations of the wonders of God in various languages (Acts 2:11).

I want you to notice that these declarations were a form of worship. It was done in one house where those who were outside began to hear what was going on. Those hearing all the weird noises began to assume the disciples had too much to drink (Acts 2:13).

When Peter realized a crowd had formed, he addressed them in the common language giving context to what they saw. When they were speaking in tongues, they were not intentionally doing it for the crowd. Overcome with the Holy Spirit, they were led into a form of worship that was new and a bit weird to them.

Let us be slow to reject or criticize behavior we don’t understand. We rarely know what God is doing in the hearts of people.

2. Religious People Point Out A Better Use of Time

The example for this is Mary and Martha (Luke 10:38-42). Worship rarely appears as a productive use of our time. This is one reason why we struggle so much with prayer. We feel doing things would be is more important than spending time with God.

Sometimes in church, you will have a leader mention taking a minute in silence for some reason. Then notice that same person will talk throughout the entire minute. We are conditioned to feel we need to be doing something. But, in order to spend time with God, we need to quiet ourselves down to hear His whisper.

3. Religious People Point Out a Better Use of Resources

“Why this waste?” This is the phrase of a religious attitude. The disciples used this to describe the act of worship by the woman at Bethany who poured the expensive perfume on Jesus (Matthew 26:6-13).

Churches used to be the most beautiful buildings with detailed architecture and magnificent windows. Now we try to get by with big warehouses to save money on more important things. I’m not saying we should spend all of our money on church buildings, but what is a waste to you may just be an act of worship to someone else.

4. Religious People Are Embarrassed By the Messy

When David brought the ark of God back into Jerusalem, there was much celebration. David danced before the ark with all his might, but his wife, Michal, was embarrassed by his display (2 Samuel 6:20-22). She was disgusted that the king would lower himself to such a display.

However, David was not dancing for her; it was his act of worship to God. He let her know that his worship may become even more undignified. The Bible then records that Michal never had any children (2 Samuel 6:23).

Some of us have become barren in our spiritual life because we have judged someone else’s worship. If someone is bringing their gift to God, it doesn’t need to pass our inspection. This goes both ways. The wild worship need not be criticized by the calmer ones in the community, nor should the quiet worship be put down by the more expressive ones.

Paul says that in everything we do we should do it all to the glory of God (Colossians 3:23-24). Worship is not limited to singing on Sunday morning. There are so many expressions of it in our own lives that we shouldn’t be surprised in the variations we see in others. Let us just rejoice that people are enjoying God and expressing their love of Him.

previousWhat I Believe
nextThe Blessing of the Annoying Love of God

Wow -- those quotes are POWERFILLED (as is your coaching words & ideas you share with us)!

Thank you for your hopeful words.