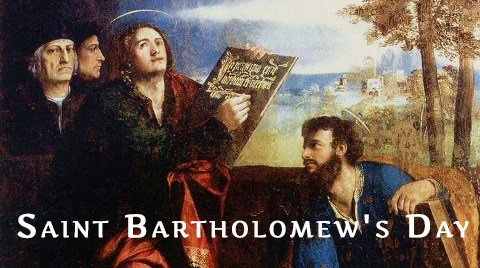 Many in the liturgical tradition are celebrating Saint Bartholomew today. This is one of the lesser known apostles as he doesn’t have a speaking part in the Bible. Tradition of him is also limited although there is some indication that he went north into present day Turkey in the region of that was once part of Armenia. There is also some indication he took a copy of Matthew’s gospel to India. What we do know is that he took to the message of Christ out from Jerusalem.

With that awareness the liturgical church takes inspiration from his example and prays for the same behaviors and attitudes in them. I think it is a beautiful aspect of the Christian life that many of us are not exposed to. Below is an except of the Book of Common Prayer for this day. May you find inspiration and help in your prayers through the history of the church that has gone before us.

O ALMIGHTY and everlasting God, who didst give to thine Apostle Bartholomew grace truly to believe and to preach thy Word; Grant, we beseech thee, unto thy Church, to love that Word which he believed, and both to preach and receive the same; through Jesus Christ our Lord. Amen.

BY the hands of the apostles were many signs and wonders wrought among the people; (and they were all with one accord in Solomon’s porch. And of the rest durst no man join himself to them: but the people magnified them. And believers were the more added to the Lord, multitudes both of men and women.) Insomuch that they brought forth the sick into the streets, and laid them on beds and couches, that at the least the shadow of Peter passing by might overshadow some of them. There came also a multitude out of the cities round about unto Jerusalem, bringing sick folks, and them which were vexed with unclean spirits: and they were healed every one.

I really appreciate everything you have been doing for me through these emails. Thank you and God bless you.