How to Succeed in the Wilderness 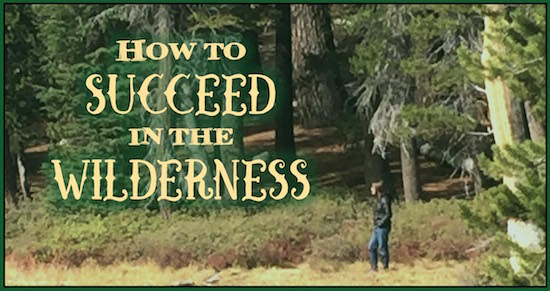 God seems to like to move my family around. It has its perks because we get to see so many places and people. This past year, we moved to a village in China where we were the only foreigners. Sometimes that worked to our advantage – sometimes it didn’t.

We learned plenty from this move. Some things were going great; others were not. However, one thing that happened was we started to feel alone and forgotten.

When Paul was blinded on the road to Damascus, God told Ananias that Paul would be called to the Gentiles (Acts 9:15). Immediately after he receives back his sight, Paul spent several days in the city preaching that Jesus is the Son of God (Acts 9:20). His time is cut short as Jews there planned on killing him (Acts 9:23).

After moving in his calling, Paul ventures off to the Arabia and into obscurity for three years (Galatians 1:17). Eventually, he did go to Jerusalem in hopes of meeting Peter (Galatians 1:18). They had not heard of his conversion, even after three years, so they were still afraid of him. Barnabas convinced them of Paul’s true conversion.

Paul again began to preach the gospel freely and again the Jews tried to kill him. This time when the believers protected him, they sent him off to his hometown of Tarsus (Acts 9:26-30).

For four years Paul was away from all the leaders of the early church. Alone in his hometown, Paul sat. We don’t know what he was doing or what he was feeling, but up to this point, he only had brief glimpses in what God called him to do. Seven years after his calling, he is still not seeing the promises come true.

This seems to be a common development strategy of the Lord’s. Moses spent forty years in the desert after trying to free Egypt by killing a soldier. Joseph experiences success as a slave and then sent to prison. David gets into the royal throne room by coming a trusted military warrior “killing his tens of thousands,” but then spent around 10 years running from the guy holding the position he was promised.

The timing of each of these men coming into their divine calling was seemingly out of their control. When God gives you a destiny to pursue, He is the One who makes it happen. Our role is to hold onto what He said.

I have been thinking about this because of my time in China. With God changing so many things around and rearranging our plans, it was difficult to keep focused on whatever He was doing. Being separated from our support system added additional stress.

God’s Word to Your Wilderness

I can’t imagine what Paul, Joseph, Moses, or David felt during their years of waiting. I feel like there are many people in this phase of their development. You have seen God do some things through you, but you are currently in a seemingly forgotten place. You know you have more in you than what you are currently doing, but you are frustrated with the level you are at. I just want to let you know you are not forgotten.

God knows the plans He has for you (Jeremiah 29:11). He who started a good work in you will carrying it onto completion (Philippians 1:6). He will work out all things for good (Romans 8:28). He is not done with you.

How to Succeed in the Wilderness

Keep trusting in God and believing He is good. Cultivate your relationship with Him. Develop relationships with people who know your heart and who you can process things. Maintain your expectation and look for your breakthrough. It is coming.

In the meantime, you may be the person that will release someone else’s breakthrough. Maybe you are the Barnabas that someone else needs to put them in the path of their destiny and calling. Don’t get so focused on your own destiny that you miss leading others into theirs.

Success in God’s kingdom is not personal. Success is always for the body because we are a part of the body. As you help others into their calling, God is moving you toward your own.

In the meantime, enjoy God. He knows what He is doing. When you get frustrated in the waiting, hang out with God. It is hard to stay frustrated as you get time with Him. If you are struggling connecting with Him, bless other people in your life. Loving other people well opens you up to experiencing His pleasure.

1 thought on “How to Succeed in the Wilderness”

previousA Better Way to Pray by Andrew Womack
nextWhere is the Great Joy?

Thank you for your prayer blog and the emails you send out.