Be Specific In Your Prayers – Lana Vawser 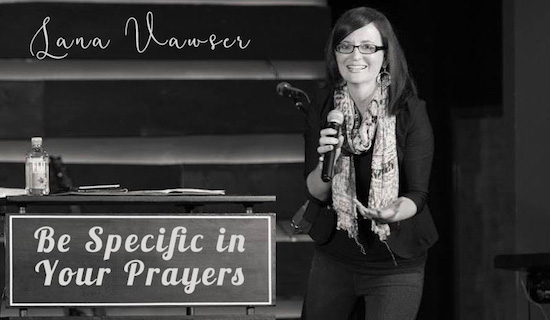 “Don’t be pulled in different directions or worried about a thing. Be saturated in prayer throughout each day, offering your faith-filled requests before God with overflowing gratitude. Tell him every detail of your life.” – Philippians 4:6 (The Passion Translation)

I came across this article by Lana Vawser this week and thought it described what many feel about their difficulties with prayer. Delays in answered prayer and/or discouragement from life not happening the way the would have expected, has stolen our faith in prayers. I hope this article will encourage you to continue to press in for more of God and more in prayer.

There is So Much More Available

For the last few months the Lord has been speaking to me a lot about this season of “unlocking” that is upon the body of Christ. The Lord is unlocking so many things in this season and there is especially a great unlocking of restoration and recompense upon God’s people for all the enemy has stolen, attempted to delay, kill or destroy. This is a season where the Lord is saying “There is SO MUCH MORE available to you, will you step in?”

In this great awakening that is taking place by the Spirit of God upon the Church, the Lord is waking His people up to who they are in Christ, His nature and their inheritance in Christ in deeper ways than ever before.

MANY HAVE LAID DOWN THEIR EXPECTATION AND BOLD FAITH BECAUSE OF WEARINESS, BATTLE AND DISAPPOINTMENT

Prayers Have Been Hindered By Weariness

The Lord showed me that many have been so used to the battle and weariness that it has majorly hindered their prayer life. It has hindered their level of expectation and faith of what the Lord can and will do. Because of the level of hardship and battle many have faced, the Lord showed me that many have become too scared or weary in asking. Many have been stuck in the place of “not understanding” the things that have taken place in the past or are taking place, but I felt the compassion and love of God, that He wants to minister to their hearts and set them free from the place of hope deferred and move them into a place of bold faith and revelation of His goodness and kindness, even in the place of mystery and not understanding. The Lord showed me that the “why’s” (why did that happen? why didn’t that happen?) have held SO MANY captive, but the Lord is bringing significant healing, breakthrough and freedom.

The Lord showed me a shift that is taking place, it’s a shift in the spirit, a momentum of breakthrough, but it is also an re-igniting of prayer and faith. There is a re-igniting taking place by the Spirit of God in this season to go back to the place of deep conviction of “taking the Lord at His Word” and seeing sudden manifestations.

The Lord showed me that He is restoring hope, He is restoring faith, He is increasing faith in the demonstration of the power of the Word of God. For where many have felt like they have been ‘asking and asking’ and it has felt like a ‘drought’ without breakthrough, the Lord is inviting His people to come and rest in the living, flowing, waters of His Spirit, the rivers of His Spirit, to be washed in the Word again, and BE SPECIFIC.

The Enemy Has Been Fighting to Discourage You

I felt the Lord have me write this word and decree over you today : “THIS CHANGES TODAY!”

Stop Listening to the Lies of Delay

The enemy has been working hard against many of God’s people, whispering his lies “get used to delay”, “there’s no point being specific in your prayers because you won’t get breakthrough, you will be disappointed again” – these are LIES and the reason the enemy has come hard against you in these areas is because you are in your season of GREAT UNLOCKING. You are in your season where God wants to demonstrate His power to unlock, release and bring great recompense to you. Where the Lord wants to release divine wisdom to you in being led by His Spirit in being specific in your prayers to see SUDDEN BREAKTHROUGH’S.

I believe that the Lord is training, preparing and maturing the body of Christ right now to bring us to the place where we see what He is saying, what Jesus is praying, what is on His heart with such clarity and accuracy that we pray from that place of deep insight and specificity in our prayers, that we access a place in the Spirit with Jesus where it is decreed, and then it SUDDENLY manifests. It is a deeper place of conviction of “taking the Lord at His Word” and what He is saying and breathing upon and echoing it.

There is a Battle Over Your Prayers

There is a battle right now over your prayer life, to keep you from the place of specificity. So I encourage you, go into your prayer closet, your secret place with the Lord, and listen again to what is on His heart and BE SPECIFIC in your prayers. Don’t allow the battle, the weariness, discouragement or past experience to keep you in a place of ‘general prayers’ because of hope deferred, distraction, weariness or despair.

KNOW that there is a season upon you right now of great unlocking. Jesus wants to bring about greater breakthrough, momentum, freedom, birthing and increase into your life, and He is inviting you to come, approach Him boldly, and be specific in your prayers, knowing that He is SO good and His plans for you are greater than you have imagined. (Jeremiah 29:11)

The Season Has Changed

I heard the Lord decreeing over you:

You are moving into a greater place of radical bold faith.

You are moving into a greater place of hearing the whispers of His heart with greater clarity and accuracy, seeing the divine strategy of the Lord to be even more specific in your prayers to see significant breakthrough.

You are moving into a land that is fruitful, it is restful in His presence, it’s the deeper place of Psalm 23, and feasting at His banqueting table in the presence of your enemies.

You Will Gain a Hunger For Prayer

You are moving into the place where the fire of God is FALLING on your prayer life. There is a great revival, outpouring, awakening, and increase over your prayer life. I heard the Lord decreeing that the hunger for prayer is increasing significantly. I saw many of you moving into a season of HOURS and HOURS more than you have ever spent in prayer and time with Jesus. Your prayer life is about to come alive in a way you have NEVER experienced.

Your heart is being increased to believe again, to dream again, to take the Lord at His Word and to see POWERFUL demonstrations of signs, wonders and miracles as you prayer. I heard the Lord say “The day of seeing a MOMENTUM of transformational suddenlies in your prayer life is upon you.”

The landscape has changed! No longer barren, but fruitful! Your eyes are being opened by the Spirit of God in greater ways to the revelation of what happens and takes place in the Spirit when you pray.

Your eyes are being opened by the Spirit of God to SEE in the Spirit the angelic hosts and activity that takes place when you pray specifically and boldly what the Lord is speaking and releasing which will take your faith to a whole other level.

Your Dreams Are Important

IN YOUR DREAMS YOU WILL SEE SO MUCH MORE

The Lord showed me that He is beginning to show His people in greater ways in dreams in the night the power of prayer and what happens when you pray and pray according to His Word and what is on His heart – SPECIFICS! The Lord showed me that it has begun but it will continue to rapidly increase, the revelation of how much more is available to His people in Christ. There is a divine invitation to ACCESS MORE. There is SO MUCH MORE available and the Lord is awakening His people in deeper ways to the power of prayer and taking His people deeper into the revelation of Isaiah 55:11:

“So will My word be which goes forth from My mouth; It will not return to Me empty, Without accomplishing what I desire, And without succeeding in the matter for which I sent it.”

Wow, thank you so much for these.

I want you to know that your love and gentle persuasion come through your messages.