Who Does God Say I Am? 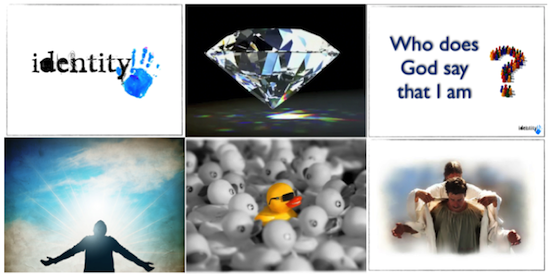 Today’s post also comes in response to a post earlier in the year on Preach the Message You Were Given. I have gotten to know Dave Chater this past year. We have met weekly to talk about life and encourage each other in the Lord. He loves the Lord and this message on identity is very dear to his heart. You can find out more about him at his website, Connexion Zone.

I have been so blessed and encouraged getting to know Kevin over the last year as we live in this amazing nation where God has called us. He lives a truly prophetic lifestyle that inspires and encourages me each time we are together.

There is an aspect of living a prophetic lifestyle that has been helping me connect with the Lord in new ways over the last couple of years and that is identity – specifically prophetic identity. For me, for there is one question that encapsulates identity from a Kingdom perspective – “Who does God say that I am?”

So, what is identity? The Oxford dictionary says, “identity is the fact of being who or what a person or thing is.” Simply put, identity is who we really are.

I love this version from the Message Bible. First and foremost I am His child, His son. That is who I really am. As God’s children, we each have an identity which originates in the heart of our amazing Father.

As I have looked at the life of Simon Peter from the perspective of identity, I’ve received some fresh revelation I would like to share with you:

1. Jesus called out Peter’s true identity long before his life reflected who he truly was (Matthew 16:18-19). God is speaking our true identity over us all the time and is calling us to partner with Him to be those who speak our Kingdom identity over one another.

2. The name Simon means “broken reed.” The world had done its best to form Simon Peter’s identity, but this was not the end of the story. Jesus called him Peter which means “rock”, someone whom God would use powerfully to bring heaven to earth and to build His church. No matter how our identity has been moulded by the world, what Jesus says about us is the truest thing in all the universe.

3. Peter’s true kingdom identity required supernatural activation. Peter received a “supernatural jump-start” into a new level of identity and sonship. This occurred most dramatically in the upper room as the Holy Spirit wind from heaven released a supernatural sound that resonated with Peter’s spirit, activating him to walk in his true identity (Acts 2:1-4).

We each need this kind of identity activation through ongoing personal encounters with God. Just like Peter, no matter where we find ourselves in life, we are only one God-encounter away from being activated into a level of identity. We are all “world-changers in waiting.” That is who we really are!

There are times when I still hear the whispered lies of my old world-formed identity. There are days when the voices of fear, rejection, insecurity and competition seem louder than the Father’s voice over me.

On one of those days, I cried out to my Daddy. I didn’t consciously know it, but what I desperately needed was an identity activation. Holy Spirit said to me clearly, “stand up.” So, I stood up. Then He said, “step back into your sonship.” As I physically took a step backwards, I could sense my Father placing afresh my sonship identity around me like a robe. In this place I was secure, loved, fully accepted and powerful. I had stepped supernaturally into a new level of my true identity and I’ll never be the same again.

There is only one letter different between the words “robed” and “robbed.” The letter is “b”. Daily we get to choose; will we be robed in sonship or robbed of our true identity? Which one will it be (pun intended) for you?

General Identity Statements for Every Believer

The Word of God is full of truth about who God says we are.

This is what Derek Prince calls General Revelation. This is truth about our true identity. True for all God’s children, all the time. However, our God-formed identity (who we really are) is also absolutely unique – a blend of awesome characteristics shared fully by no one else in the universe but me.

Unique Identity Statements for You

One of the most powerful ways that God communicates with us is through prophecy. I have discovered that the prophetic words that have been the most important in my life always contained a strong identity component. The Father was calling out my unique identity. When I hear the Father saying who I really am, this resonates powerfully with my spirit. I love how Graham Cooke says it, “Prophecy upgrades identity and empowers us into the next dimension of God’s purpose.”

When talking about prophetic identity, Dano McCollum suggests that we go back over all the prophetic words we have received and extract the identity elements. We can then compile these identity elements into an identity statement – who God says I am. I would then suggest running this statement past an experienced prophetic voice in your life to help you bring things together.

Nowadays, I find myself going back to this identity statement again and again. Here is a part of my identity statement, “I am a prophetic father and shepherd leader. I am an administrator of spiritual storehouses and releaser of heaven’s resources – hope, wisdom, revelation, clarity, life, dreams and excellence. I am a ground breaker, trailblazer and pioneer.”

This brings me back to the question I asked at the beginning, “Who does God say that I am?”. What is your answer? What is your unique prophetic identity?

I love what you wrote. It is like you are talking to me.