Never Give Up; Never Tire Out 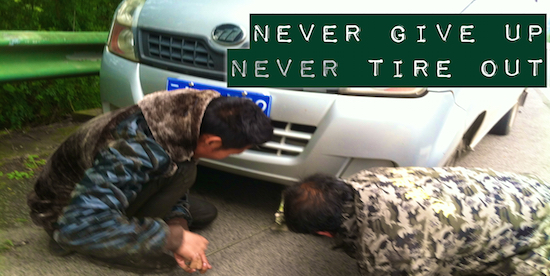 Being Prepared for the Road Ahead

At some point in my life, I learned how to change a tire. I assume my dad taught me, because I know to loosen the bolts before lifting the car off the ground and I know to put the car jack under the axle. I don’t remember having the lesson, and I don’t remember ever having to change one. Every flat I remember was some slow leak, small irritants that I could just call AAA to fix.

Now that I drive in China, I think about flat tires all the time. At least once a week, I see someone pushing his or her electric scooter down the road with one flat tire. There is so much road construction and so many huge potholes I’m actually surprised there is not hundreds more struggling with flats every day.

Last week I took a road in town I have never driven on. It was a ring road, which is like a by-pass road to avoid the city traffic and stoplights. Generally the road was clear of cars, and I was able to go the speed limit of 80km/hr (or 50 mph for my friends in America). The trip started quite nicely.

Hitting the Speed Bumps in Life

After some long distance, I was coming to a rare stop light on the road. I slowed to watch for cars, but as I had a green, I continued through. That’s when I felt seemed like my front two wheels coming off. There was a trench dug in the road – some unmarked road construction. My body tensed up wondering if I just damaged my van; my jaws were clinched and my shoulders up to my ears. What just happened?

For the next 20 minutes I was traveling at half the speed limit or less. Some was a lot less, because I now found traffic and heavy road construction. The road was going from three lanes to one and back again. It was taking me over unto the other side of the road with cars coming at us, then merging back unto several people on electric scooters. Mothers with babies on their backs were standing in the middle of the road. Old women carrying loads of something or another were also there. It was bedlam, but I was actually glad to go slow and easily navigate the now abundant potholes and road obstacles.

Pulling Over as Life Races On

Finally coming out of this crazy ordeal, I found the roundabout that took me onto the super highway (by the way, I love its name). All I had to do was accelerate to merging speed and get back on the better road. I started to pick up speed while watching the other traffic. Two seconds before impact I saw a series of three or four more large potholes. With the grace and reflexes of a cat, I quickly avoided two or three. Then, wham!

Not good. Not good. I came out of the tunnel and knew I needed to get to the side of the road. I pulled over only to confirm my fears; I had a flat.

Stepping Up to Life’s Challenges

I told myself that it would be ok. I know how to change a tire. It may be China, but cars are still cars, right?

I remembered a spare tire hanging unto the bottom of the van. I went to go find it and figure out how to get it detached. There was some kind of contraption that lowered the tire by unscrewing a nut near the back. Clever. Now to find the tire wrench.

I remembered seeing some tool under the hood. I checked there. No tire wrench, but I found the jack. Progress but not far enough. No tire wrench means I can’t get the tire off or get the spare out. Now what do I do? I’m on the side of the super highway with cars speeding by uncomfortably close. There is no city, no exit ramps in sight. What do you do in China? Can I leave a car on the side of the road?

After a few phone calls, I see a big truck on the side of the road about a half-mile behind me. They had to have what I needed. They may think it weird, but it was my best option.

I locked up the van and started making the walk toward this group of Chinese trucker men. The whole walk there I could feel their eyes on me, but my mind was elsewhere. I needed to figure out how would I be able to communicate what I needed. I don’t know any of these words in Chinese. I quickly grabbed my translation app to find ‘flat tire’ and ‘lug wrench’. Flat tire, check, but no word for lug wrench. I guess I have to play charades with this one.

I reached my destination. Five men sitting on the side of the road by a large truck with its hood opened. If they were doing work on the truck, they stopped before I reached them… at least to curiously watch me approach. I mustered my determination and ventured to ask them what I needed.

Here is how I imagine they heard me. “I have a tore float. I don’t have a thing (me mimicking turning a lug wrench). Can I bungle your thing?” The look in their eyes betrayed their mounting confusion.

After a pregnant pause, one of them was given inspiration that could only have come from God. He said, “flat tire?”. Not only was my pronunciation misleading, my translation had the word reversed from how these guys used it. But with new understanding, they asked about what I needed. They said something. It was a question because I could tell they wanted a response. I assumed by what they were doing that he wanted to know if I had a jack. I might have understood it wrong, but I said, “I have. I need a thing (then repeated the motioned to show me using a lug wrench).”

Then the man I understood to be the leader told something to the elderly man in the group, who then started to dig through a toolbox. Success, I thought. Then the leader started yelling at him and blocking me from seeing the toolbox. Maybe he doesn’t want me to know he has one. He reached toward the toolbox shoving the guy’s hand. Here I am in China, on the side of the road, trying to communicate with five truckers, and a fight may just break out.

The guy by the toolbox stands up with some tools. Then the leader literally pushed him towards me where he had to catch himself to not fall to the ground. He had been chosen, not only to let me borrow the tools I needed, but to change my tire for me.

Now all of us made the long walk back to my van. It was interesting journey. This team of six: five Chinese truckers and one foreigner. Nobody was talking. It was uncomfortably quiet except for the sound of cars speeding by pushing us with their wind as they passed.

Looking around, I just stood there confused. What do I do now? I weakly thanked them as they continued to walk away.

Putting It All Together

Life doesn’t always go as we expect. There are many bumps in the road, and we can either give up or find another way to go. Prayer is really no different. When we pray our expectation is to pray and then wait for the answer. But, many times the road takes a detour or stops altogether. These hindrances are almost never the end that God has for us. Don’t give up. God has hidden small provisions along the way for us to uncover.

I left the side of the road that day thanking God for His provisions. Obviously I was successfully back on the road, but there was so much more. I was given enough wisdom to successfully communicate my need, and God covered my shortcomings giving inspiration to my helpers. I had only wanted to borrow the needed tool; instead I got several skilled workers to change the tire for me. And, let’s not forget I was able to get safely to the side of the road on a completely flat tire.

When life throws obstacles at you, don’t give up. Ask God what potential provisions He has available for you. We are not like those without God and without hope. We are more than overcomers. In every situation and circumstance in our lives, we have hope. Take time today thanking God for how He has provided and is providing for you. Don’t give up on those things for which you are praying. Press in for your answer, for God has good in store for you.

6 thoughts on “Never Give Up; Never Tire Out”

This email is so on spot with what we are dealing with today.