Why Men Don’t Pray & How to Get Them to Start 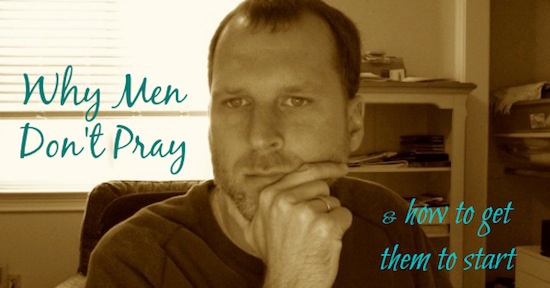 In the beginning while Eve was being tempted by the serpent to eat the forbidden fruit, Adam was there silently watching. He didn’t speak up; he didn’t correct; and he didn’t even fight. Adam let Eve be deceived and then joined her when it looked favorable.

Later on Jesus when had been caught, the men who followed him everywhere all vanish. The women stayed behind and watched His torture. They were also the ones who went to the tomb to prepare Jesus’ body.

I’m sure men can seem fickle to God. Whenever there is power, prestige, and notoriety, men come en masse. When it is time to pray and spend time with God, there are only a few good men. We want to lead the Church, but we find it hard spending time with God. Why do men not pray? How can it change?

1. Men Don’t Know What to Say.
Men are not known for being good communicators. As many wives know, men generally don’t maintain the conversation. It’s not that we don’t care, we just don’t know what to say. Most men often want to wait until they know the right thing to say, which means many times they just remain silent.

2. Men Don’t See Prayer as Productive.
Men like to be productive. This is why that Bible reading is not as hard for them. They can come to the end of that time and mark off the chapters finished. Prayer is not goal oriented. You can go through a prayer list, but the next day you are doing the same thing. Where is the progress?

3. Men Don’t Think They Need Help.
Why are there jokes about men not asking for directions? Because that scenario is true for most men. Men see asking for help as a sign of weakness. A lot of prayer is asking God for help, and men think they can handle it themselves if they only try harder.

5. Men Didn’t Get an Answer When They Had Prayed Before.
Men love the definition of insanity, doing the same thing over and over expecting different results. Since prayer didn’t work in the past and we don’t know why, we will not fall into that trap again. Men don’t like to look foolish, therefore we stop praying.

Obviously those reasons will not represent every man, and they are not excuses. They give understanding to where most men are. With this as a starting point, we can identify some ways of helping men to pray.

What Would Help Men to Pray?

1. Men Can Pray By Simply Resting in God’s Presence.
Prayer is not about talking but spending time with God. Men don’t usually spend time with friends in long conversations. They go fishing or work on their cars or watch TV. Men like to just hang out. By being aware of God’s presence throughout their day, men can hang out with God and know that He likes them.

2. Men Can Pray By Listening to God’s Voice.
Prayer is two-sided. God likes to speak. As men listen for God’s voice, prayer comes alive. The conversation is no longer dependent on what they say, but men can listen and respond. New ideas of what to do and talk to God about are developed. Prayer becomes productive.

3. Men Can Pray By Reading the Psalms.
Psalms give some framework for men on prayer. It gives words to underlying emotions, of which are hard for men to grab hold. God loves real honesty. As men learn to be themselves with God, the barriers they feel with God get removed.

4. Men Can Pray By Praying with Others.
Sometimes just taking risks and offering prayer for someone else is exactly what men need. As they see that their words do offer life and hope into others, they gain the motivation to continue to pray. Also receiving prayer from others offers encouragement for the power stored in prayer.

5. Men Can Pray As We Hear Testimonies of Prayers That Work.
There is power in the testimony to draw others to expect more from God. Whether good or bad, testimonies are also a challenge to men that it is possible. It’s like the four minute mile; the barrier of impossibility is broken, so I will press on toward achieving success.

Men were created for prayer, but it will look different than how a woman prays. Neither is wrong; they are just different.

Men, God has something for you. Go to Him. Find Him throughout your day. You want to be powerful and productive with God? Then prayer is your key to success.

Thanks for today 's coaching, always on point. God continue to bless you to be a blessing to us your readers.

These are encouraging. Keep sending these messages.