What’s the Meaning of Self-Sacrifice? 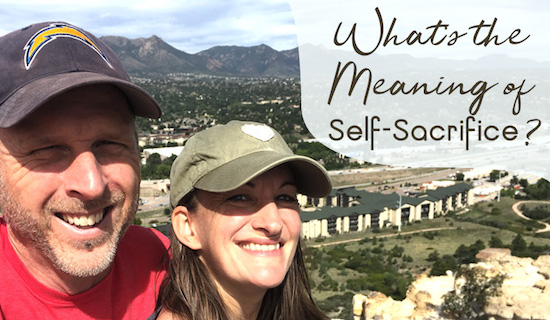 Over the last few weeks, I have been encouraging you to see the value and worth God put in you. As we live fully from who God made us and go after the desire He has placed in our hearts, we live fully alive, full of joy, and greatly impact the world around us. However, so much of our Christian tradition is about self-sacrifice. We are trying to empty ourselves to get more of God. How do we rectify this seeming conflict? What’s the meaning of self-sacrifice?

How Does Love Influence Sacrifice?

To understand the Christian meaning of self-sacrifice, we first have to understand love. Love is the guiding principle behind Christianity. For God so loved the world, that He gave His one and only son to die for us (John 3:16). For the joy set before Him (the salvation of you and me), Jesus endured the cross (Hebrews 12:2). God demonstrated His own love for us in this, while we were still sinners (still His enemies), Christ died for us (Romans 5:8).

To understand love is to know that there is a self-sacrifice involved. It is that one party is not worthy or less than; it means that one is willing to put aside their wishes and desires for the sake of the other person. Jesus sacrificed Himself that we may have access to God; we also are called to sacrifice in order to love.

Sacrifice Expresses Value to Those We Love

I got my first glimpse of this in a silly way in college. My roommate and I both got a crush on the same girl. We individually would go out on dates with her behind each other’s back and thus becoming silent rivals. Because of this, we started avoiding each other entirely. Our friendship we had for ten years started to unravel.

One night I was in our room doing homework, when my roommate came to me to confront the situation. He told me how he was seeing this girl and knew I also was seeing her. But then he showed me how to love in a friendship. He told me how much he valued our friendship and was willing to stop seeing her. He was willing to give up something he wanted to value something he wanted more, my friendship.

This is a silly example because neither one of us ended up with the girl. We have both moved on and have happy marriages and kids we adore. What I gained was an example of how true love worked – it involves self-sacrifice.

Now that I am married and have kids, my wife and I have things we desire and are pursuing. But, we don’t let those things interfere the greater purpose of loving each other and raising our kids. We regularly sacrifice things we would like for the sake of expressing our love. We both want the other person to succeed and experience their desires, and we trust one another by sharing those desires with each other.

When we desire to empty ourselves for God, we are not saying we are not important; we are telling God that we value our relationship with Him over anything else we may want. It’s not that God doesn’t want us to desire to be married with a good job making a lot of money and having a large influence on the world. But, He doesn’t want this to be so much of our focus that we forget Him in the process. We have to trust Him with these desires, setting them aside to follow Him, and trusting that He will bring them about in His way.

Emptying of Ourselves Was Modeled By Jesus

Jesus modeled this for us. The joy set before Him was His desire to be united with us. He never denied His greatness, but He emptied Himself and took on the form of a man and gave Himself to be killed on the cross. For the love of us and God, He willingly gave Himself up. Then, God gave Him the name above every name (Philippians 2:6-11).

Self-sacrifice doesn’t mean that you are not important. You just have something that you value more. Also, when it comes to our relationship with God, self-sacrifice is not one-sided. God didn’t withhold His Son from us but gave Him up to die for us, how will He not also give us all things (Romans 8:32)? Our self-sacrifice is an expression of trust and love, and it is the pathway to experience all the joy God’s kingdom offers.

1 thought on “What’s the Meaning of Self-Sacrifice?”

I am grateful for your teachings on prayer.

Thank you for all your sharings. It's helping me a lot in my ministry.