Your Life Is To Draw People To More of God 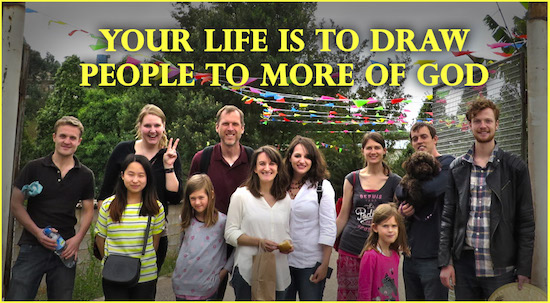 The Faith of Noah

Noah is an unusual story (Genesis 6-8). We have God regretting he made man. He was so fed up that He was going to wipe everything out to start over. This is not a side of God that we like to think or talk about.

However, there was one who found favor with the Lord. Noah was a righteous man, blameless among the people. So God told Noah His plans to wipe out the world and how He was going to save Noah and the animals. Noah was given the details of building an ark, and he did everything just as God commanded.

This is one of the first Bible stories people hear, yet I was thinking about it again recently after reading Hebrews 11:7.

By faith Noah, when warned about things not yet seen, in holy fear built an ark to save his family. By his faith, he condemned the world and became heir of the righteousness that is in keeping with faith.

Over the next few days, I let these questions linger in my mind:

Does God Still Condemn the World?

Let’s focus first on this last question. All of God’s anger and wrath regarding sin was placed upon Jesus on the cross. God did not send His son to condemn the world, but to save it through Him (John 3:17). We also have the sign of the rainbow, in which God said He will never again destroy the earth with a flood (Genesis 9:8-17). God’s heart is not to condemn but to save.

Then why did Noah’s faith condemn the world? Our faith seems to be a very personal thing. Sure we may share our faith with others at times, but our decisions of trusting God is ours. This decision may affect close friends, but how does it condemn a whole world.

I think it may help to refer to a passage in Matthew where Jesus began teaching in his hometown. While His teaching amazed those that heard, they took offense and Jesus did not do many miracles there… because of their lack of faith (Matthew 13:58).

It is impossible to please God without faith (Hebrews 11:6). God loves faith, and it creates space for Him to move on our behalf. Noah’s faith created space for salvation to come to Noah’s family and the animals.

Even more, the movement of God attracts hearts to believe God. When Mary was pregnant with Jesus, she was instructed to spend time with her cousin Elizabeth. Elizabeth’s faith, which created space to carry John the Baptist, increased Mary’s faith in bringing the Son of God into the world.

While Noah’s faith created momentum for others to have faith, no one else responded. Even though Noah’s faith activated the movement of God, others rejected this move and did not respond to God. Therefore the world was condemned through Noah’s faith.

Our Faith Encourages Faith in Others

How does this affect you and me?
God desires our faith in God to move others to increase their own faith in Him.

Four years ago my wife and I felt the direction of the Holy Spirit leading us to China. We felt He wanted us to create a family for teenage orphan girls that aged out of the orphanage system. We felt we should get a farm that would create space to take in more girls to give them job skills and hope for their future. Through this process we have started a business in China from scratch, we have been given a farm, and we have had people from Europe, Africa, Oceania, and the US coming to volunteer.

People we know in our city tell us when they first heard our vision they didn’t think we could do it (thankfully they kept this to themselves). This is not to shine light on anything great we have done. Our Chinese accountant can’t believe we were granted the business visa since most foreigners are declined these days. We can’t make someone give us a farm. These are things God has done.

There is More of God’s Goodness

What our stories with God do is raise the expectations for what is possible to those who hear them. Now God can call these hearers to greater things because they have a new perspective on what is possible.

Our faith is supposed to encourage faith in others. Take risks and believe God for more. In doing so you are making room for more people to experience the supernatural provisions of God. There is more of God’s goodness we have yet to experience. Let’s go take the adventure.

previousRemoving The Burden of Trying to Prove Your Love
nextWhy Do I Feel Punished For Doing Good?

Thank you for all your sharings. It's helping me a lot in my ministry.