Have You Tried This Way to Overcome Fear? 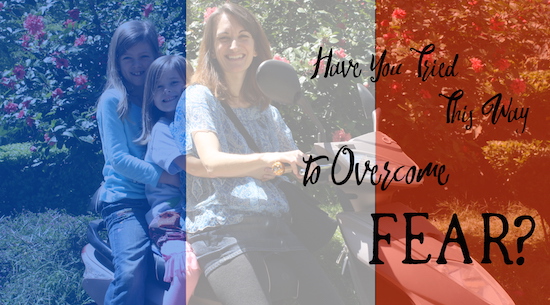 Fear Comes At Us In Many Ways

Last week we were once again reminded of the dangers in our world. In the aftermath fear has entered in, but like most fear we are not sure where we should focus it. ISIS claimed responsibility, but who are they and where are they located. People fear the Syrian refugees flooding into many countries. Christians fear all Muslims as possible suspects.

Fear clouds our thinking because it focuses on problems and extrapolates potential problems that may happen later. Fear steals our hope. Fear attempts to prepare us for the potential problems, but it actually stops us from living.

Fear comes at us in many ways. Just yesterday it tried to enter my life. I share this story to highlight a way to overcome fear.

Getting Around in China Can Be Tricky

Getting around in China can be tricky. When you think of a highly populous nation, traffic can be chaotic. Add to this Chinese traffic rules don’t mirror those that I grew up with in America. The person who has the right of way is not based on the direction of the traffic as much as who gets there first. If you get your nose in front, you have the right of way.

This somehow works out well in the everyday traffic on the roads. The danger comes from traffic entering from side streets. They will jump out in front of you with the smallest openings giving you very little time to react.

I must admit most of this added pressure on the road is somewhat exciting. There is a lot more energy exerted than the short run to Trader Joe’s back home.

One additional obstacle we face is there are more than just cars on the road. There are scooters en masse, bikes, pedestrians, buses, road construction, parked cars in the road, and all of these coming from any direction. There have been cars completely stopped in the middle lane of the expressway. There have been a herd of cows or goats down main roads. Then there are the grandmas with babies strapped to their backs hopping over barricades to cross the street. In order to drive in China, you need to be prepared for anything.

Yesterday I was driving my electric scooter with my two girls piled on. They had a class with some other kids a short drive from our apartment. As we were coming home, my oldest was squished on the floorboard, and my youngest was balanced on my seat in front of me, and I was carrying a load of supplies in a backpack. It wasn’t as loaded as some other bikes, but we were full.

You can probably already tell where I’m going. We were coming down the street when another scooter decided to pull out from a side street and stop in front of us. If I was alone I may have been able to avoid him with a quick stop or a sudden swerve of the bike. But with my two precious treasure on board, I was limited in my choices. I did my best to stop but was just a bit too slow and hit the bike that stopped perpendicularly in front of me.

As we fell I tried my best to slow the descent. I quickly got my leg down, but the momentum was more than I could offset. My oldest hit her head hard on the front of the e-bike but pretty much stayed on the floorboard. My youngest however came out head first to the street.

As we lay on the ground, a crowd immediately was present. People were already suggesting we go to the hospital. Across the street people had their cellphones out to take pictures. But as I laid on the ground, fear crashed in. Was everyone ok?

I reached for Elizabeth who had come out head first. She had a slight scratch on her nose. Rachel said she was fine and started speaking in Chinese to the bystanders. The guy we hit was immediately on us trying to pull us off the ground. I resisted to make sure that adrenaline was not hiding real injuries. Then Elizabeth’s nose started to bleed. She said it didn’t hurt, but it definitely added to the drama.

Here is a Way to Overcome Fear

Fear wanted to set up a place in my heart. How many more circumstances in my life am I completely at the mercy of the actions of others? How much can I really control?

In that moment still on the ground with cars and buses driving by, I took my girls and started to thank God with them for His protection. With blood dripping on the street, we recognized our only true protection was from God. Instead of focusing on potential of more accidents, we recommitted the focus of our thoughts to how God protects us every moment of every day.

Fear tries to get us to focus on the problems or the potential of future problems. In order to break its hold we need to focus on God’s provisions and the steadfast hope we have that He will be there again. The way to overcome fear is to actively thank God. Thanksgiving is our key to overcome.

Next week America will celebrate Thanksgiving. It’s coming at just the right time. We need this reminder of all the things for which we are thankful. Instead of spreading fear, let’s tell of our thanksgiving. You can start on the comments below. I would love to join with you in the news of God’s goodness to you. May this be the start of a season of seeing more of God’s provisions.

Thanks for the great advice. You really made me believe I had power to praise. It’s a great great pleasure to have you as my prayer teacher.