Why Pray When You Can Fight – Ed Hird 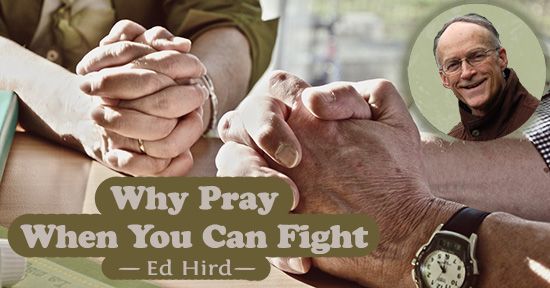 Today’s post comes from the Rev. Dr. Ed Hird. Ed is the Rector of St. Simon’s Church in North Vancouver, BC Canada and is an author and conference speaker with a passion for Christian renewal. We have been connected for several years through social media, and I asked him to write us an article to encourage us on our prayer journey. You will be glad that I did.

I Found Church and Prayer Boring

I became a Christian 42 years ago, after 17 years of spiritual hide-and-seek. Being raised in church, I was taught to pray as a child but never really understood the intimacy of a real relationship. As a teenager, my prayer life gradually faded into non-existence. I never rejected God. I just kept God at a convenient distance without even realizing it.

God to me was not untrue, but rather irrelevant. I never rejected prayer. It just slipped off my radar screen into oblivion. I never rejected the Church. I just found it painfully boring and obscure. Though I was desperately seeking for the meaning of life, I had no idea that the Church would have anything to offer in that area.

Fighting Made Me Feel Strong

As a teenager, I was brutally attacked by a gang member. I turned to martial arts in a secret desire for both self-defense and revenge. Fighting made me feel strong. I had no idea that prayer might turn out to be a more powerful weapon.

Within a year, I came to know Jesus Christ on a personal basis, and lost the desire to get even. A few years later, I discovered that this bully had gone after someone larger than him who had kicked this bully’s teeth in and twisted a broken beer bottle in his face. Hearing that story taught me that violence always breeds violence. It was better to forgive because there is always ‘a faster gunfighter just waiting around the corner.’ Even with that realization, it still took me twenty years before I finally parted company with martial arts.

When I met Jesus Christ 46 years ago, I was flabbergasted that someone was actually listening. Prayer no longer felt like talking to the ceiling plaster. It felt personal, real, and infectious. I couldn’t get enough of connecting to this new best-friend.

There had been an emptiness inside me that skiing, golfing, and parties couldn’t fill. Through prayer, I felt a new inner peace and warmth that even my former drinking buddies noticed.

Going back to church, I noticed that church wasn’t as boring as it used to be. While it may have changed, the big thing was that I had changed from the inside out. I developed a new love and concern for people that I used to avoid and even look down on. Instead of resenting life, I began to wake up looking forward to the next adventure that was ahead of me.

One of the things that troubled me though, as a new Christian, was the infighting between all the different denominations. Why couldn’t the Anglicans, Baptists, Pentecostals, Mennonites, Presbyterians, etc learn to get along and stop competing? Sometimes Christians reminded me of my old life as a non-Christian when I would rather fight than pray.

One of the wonderful gifts of living in the North Shore community of Vancouver, Canada is that denominational bickering is at an all-time low. Clergy and pastors speak well of each other’s congregations and even freely send parishioners to attend other churches. There is a generosity among North Shore pastors that allows us to bless each other instead of cursing each other.

This hasn’t happened by accident. It is the fruit of forty years of prayer by the North Shore clergy, first at Hillside Church, then at Valley Church, and now at Sutherland Church. By praying together on the second Wednesday of each month, God has been teaching the North Shore pastors how much we need each other.

We busy North Shore Clergy have been learning that we are too busy not to pray. By focusing on Jesus Christ, we have been rediscovering that we are on the same team. Denominations are second. Jesus is first.

Building Others Up in Prayer

Every denomination has its own strengths and weaknesses. Instead of putting down another group for their flaws, we are learning to hold them up in prayer that they may become all that they are meant to be. Presbyterians don’t need to become Anglicans, and Anglicans don’t need to become Baptists. Our real calling is to love each other with the life-changing love of Jesus Christ.

Many churches have formed because someone was hurt. We have been learning that it is time to forgive, time to heal, time to pray. Why fight when we can pray? My prayer for those reading this article is that we may rediscover the deep truth that the family that prays together stays together.

If you enjoyed this article, let him know through a comment below or by checking out books by Ed Hird

such as his award-winning book, Battle for the Soul of Canada.

This was a blessing and encouragement to read! I will be sharing it at a meeting I participate in the near future. Jesus is wonderful!

Your prayer letter today really spoke to my heart.