Why is Coming to Jesus With Our Problem So Hard Right Now? 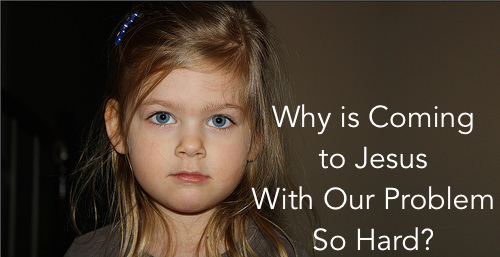 Lately my oldest daughter had been refusing to ask God for help. She is young but has always loved Jesus and the Bible. My wife and I have tried to reason with her about how important it is to go to God for help and she would just go ballistic, completely out of character for her.

Some of the tactics we have tried have been to assure her of God’s love. He is not mad with her when she needs help. He loves her so much and loves to see her coming to Him.

Another is to help her know that she is not too insignificant for God. He cares about her so much that He will come to her every need. But, He can’t help her if she would let Him. He wants the invite. (O, I know God can do whatever He wants, but we can’t count on the rescue if we are holding Him at bay).

Another is to reassure her of His response. He will not get angry at her for her mistakes. Every bit of disappoint or anger He may have ever had with us was put on Jesus at the cross. He has no anger left for us. He looks at us with love. You can come to Him with confidence.

The other day we were going over this again with her and she just retreated into a ball on the couch. We recognized that what was going on was beyond just her lack of understanding. She was being attacked by an evil spirit.

As her parents and spiritual authority, we took authority over the spirit and told it to leave. This was not an exorcist moment as the media often displays, but more like when a cop asks you for your driver’s license. There is no yelling or anger. You do it because both of you know he has authority.

Our daughter was able to get clarity, ask Jesus for help and confess her pride. She has since had other opportunities of frustration and fear where she needed to ask for Jesus’ help and she has gone to Him immediately.

The point of this post is not to look for evil spirits as the reason for every issue. The point is that we do have an enemy that is trying to steal, kill, and destroy our intimacy with God, and evil spirits will eagerly jump on any opportunity to create that blockage.

Our daughter had originally decided to choose pride over obedience, but instead of this being just a sin issue, the enemy put up an additional barrier to her healing. She was not possessed. She was not controlled by the enemy. He was blocking her understanding and feeding her lies and fear where she could not hear the Holy Spirit in her. The enemy was using the open door of pride to exaggerate the offense. She could have overcome this without us telling the enemy to leave, but the process would have been harder and longer.

Do you know people like this? They are missing Christ’s love in a particular situation. Maybe this is you? Don’t go looking for the enemy behind every bush, but also don’t stand for lies being feed into your brain that doesn’t line up with what Jesus says. Those thoughts are not yours. You have the mind of Christ. Reject them boldly and move toward God’s truth.

Once the enemy understands you are confident in the truth of Christ, his impact will become less. Still it is a choice you have to make on who will you believe.

previousPraying for Understanding
nextWhat the Wicked Witch Teaches Us About Satan

Thank you for the posts, they are such a blessing.