Hell is a Warning For Christians 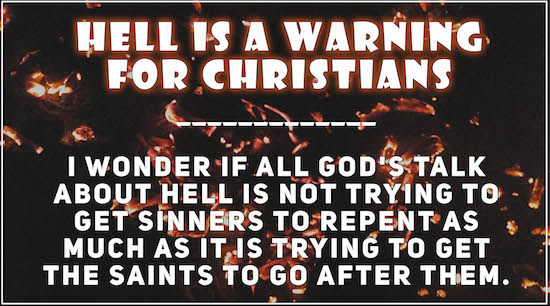 Why Does the Bible Tell Us About Hell?

Last week we looked at whether a loving God would send anyone to hell. The assumption was that He didn’t but that people chose to go there. Still, if this is the case, why does the Bible tell us about hell?

1. Hell May Be Real,
But God Doesn’t Want Us to Go There

Yesterday, a man entered into a church in Texas. He shot and killed at least 20 people. God did not want this to happen. He didn’t desire those people to die. And, He will not leave that tragedy unpunished.

Is the cross of Christ sufficient punishment for such blatently horrific acts? The apostle Paul thought so. In fact, he depended on it. He pulled Christians out of their homes and had them killed. His trust in the in finished work of Jesus allowed Him to later worship beside some of the same ones he persecuted.

Paul’s evil deeds were punished on the cross with Jesus because Paul received that gift of a substituted life. Paul allowed himself to die with Jesus and thus be raised to life with Him. Paul chose to come to God and then found forgiveness.

If other people don’t come to Jesus in this way, then His death doesn’t satisfy the punishment for their sins. Discussion of hell is not a scare tactic as much as a fact that sin goes punished.

2. If God Hid the Truth of Hell,
He Would Not Be Loving

Second, hiding the truth of hell would not be loving. If you knew there was a major danger coming, how can you lovingly hide the fact from others? If the bridge is out, you put up sign warning people. If a tornado is coming, you sound a warning siren.

When the Bible mentions hell, maybe it is not so much trying to scare people into heaven as it is trying to let people know the reality of their situation.

My wife and I teach our girls how to dress appropriately not because we prefer certain styles but to protect them from the evils that exist in our world. There are those in our world that want to sexualize women and turn them from people to objects to satisfy men’s fantasies. Seeing them as objects, these men feel it is justified to do to these women what they see in their fantasies.

It may be unfair that our girls have to be concerned about other people’s issues, but we would not be loving parents if we didn’t prepare them for the realities of this world. They have to know that if they dress a certain way, there are people who may treat them in a way they would not have wanted. Sometimes ignorance can really hurt you. God talking about hell makes people aware of the eternal consequences.

3. Hell Is A Warning For Christians

Finally, while being aware of the dangers of hell can persuade people to turn to Jesus, I’m not sure that is the primary reason for discussing it. I wonder if all God’s talk about hell is not trying to get sinners to repent as much as it is trying to get the saints to go after them.

Abaraham says that someone coming from the dead would not convince them, they have the Scripture. This seems to contradict Romans 10:14-15, how can people believe if they haven’t heard? I believe the difference is in the message being told.

Our Message is One of Love Not Judgment

The rich man wanted Lazarus to warn his brothers about hell and the judgment for their evil. Our commission as Christians is to tell people about God’s love. The fear of death is not convincing enough; people need to hear the love of God. We are ambassadors of reconciliation (2 Corintians 5:20). People need to brought to God in order to save them from hell.

Life is not a game. There are real stakes we are living for. People who die without Jesus will have made a terribly bad choice, but hell is a warning for Christians. It should compel us to tell of God’s love. If we have the slightest bit of love for the lost, we would do what we can to help them avoid it.

1 thought on “Hell is a Warning For Christians”

previousHow Can a Loving God Send Someone to Hell?
nextYou Benefit By Sharing Your Faith

I really need these words at this point of my life. God bless you.