Emily Belz of World Magazine (www.worldmag.com) writes: “The Web site for the prayer event is designed in red, white, and blue, and features an American flag and a call to prayer playing in the background. The slogan, “Our time has come” is on display along with a promise of 50,000 in attendance—a turnout that was not realized. Busloads of people were probably “stuck in traffic,” said Saadiq. Scores of Capitol police officers dotted the west lawn, more than usually appear at rallies. The officers were expecting to be dealing with a larger crowd.

Muslim blogger Sheila Musaji of The American Muslim commented that the event was “not well thought out.” Very little information was provided about the event itself, she said, adding that the terminology like “our time has come” could be “misleading,” and that it was planned too close to the anniversary of 9/11.

Several Christians showed up to protest the prayer—shouting through bullhorns about the evils of Islam. One man stood on a street corner yelling verses from Isaiah. Other quieter demonstrators handed out copies of Romans and John translated into Arabic. “Are you against the Muslims?” asked one man. “No, we’re for Jesus,” replied the man handing out Bibles.”

Commentary: So, should we fear the rising Islamic movement in America? I am reminded of the book of Habakuk, a minor prophet in the Old Testament who prophesied to Judah around the year 607 BC. Judah had strayed from God and were now getting ready to get punished by the Babylonians. Both nations were off course. Judah was supposed to, by default as God’s chosen people, to follow God faithfully. They didn’t. The Babylonians were supposed to follow the one true God too. They didn’t either. In God’s sovereignty, he would use one (Babylon) to punish the other (Judah), but would also hold the punisher accountable for its moral corruption and violence: Verse 1:5-6 reads “Look at the nations and watch— and be utterly amazed. For I am going to do something in your days that you would not believe, even if you were told.  I am raising up the Babylonians, that ruthless and impetuous people, who sweep across the whole earth to seize dwelling places not their own.

The analogy? America and the West, for centuries, has operated out of a Christian construct, but has continued to accelerate it’s drift from God. Perhaps God, in his love, is raising up a people to punish us for this drift.

So, should we fear Islam? No, we should fear God and seek him and by his strength, repent of our personal and moral drift and pursue his holy standards. God is sovereign over all events, even over the groundswell of other religions and nations. Habakuk concludes “The Sovereign LORD is my strength; he makes my feet like the feet of a deer, he enables me to go on the heights.” 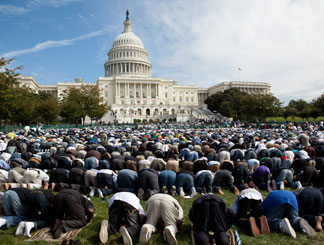 1 thought on “Follow up from Islamic March on Washington”

previousIslam Rally On Capital Hill – Prayer Alert
nextWhat If What You Are Praying Against Does Not Happen?

Thank you for your hopeful words.