Can I Say No to God? 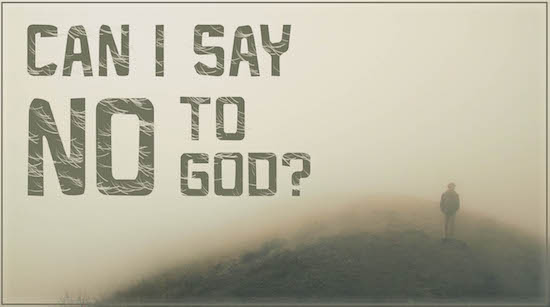 Around the time God was opening the church’s eyes to welcoming Gentiles, Peter gets hungry. As the meal was being prepared, he falls into a trance and starts into a vision. In the vision, a large sheet is lowered full of animals the Jewish people considered unclean. Peter then hears a voice telling him to kill and eat.

I remember hearing this preached as the only placed where the Bible contradicts itself because you can’t call God, Lord, and then tell Him no. Obedience seems the cornerstone of true Christian faith. A servant doesn’t question his master; the clay doesn’t instruct the potter.

Do I Have a Choice?

I was recently talking with someone in a tough situation. He was married but separated from his wife. There had been no infidelity by either person, but their relationship was clearly not healthy. His wife was showing signs of being willing to work through it, but he was scared to enter back into the tenuous relationship. He felt he was being led back into bondage.

He desperately wanted to say no to God, but he was a Christian. He felt trapped.

Why Would We Ever Doubt God?

As a young believer, you may wonder why anyone would ever doubt God. He is always good. He knows what is best. Following Him will always be the best decision in life.

I wholeheartedly agree with this reasoning, but sometimes His leading is in areas that you may not want to go. Maybe He will ask you to leave your good paying job to some unknown adventure with Him. He may ask you to reconcile with someone that has hurt you a lot. Sometimes He asks you to go out into a storm where you think you will die.

What if we don’t what to do what He asks?

Moses Said No to God

Moses is often referred to as God’s friend (Exodus 33:11), but this ‘friend of God’ blatantly said no to Him. God appears to Moses at the burning bush, and they have a long dialogue. In the end, Moses doesn’t want to go because he has a fear of public speaking.

At least twice, Moses tells God no. Finally, God relents and creates a compromise to allow for Aaron to be the spokesman for Moses (Exodus 4:13-16).

Can We Ever Say No to God?

The question is not whether saying no is the right thing to do; the question is really based on whether God will reject us. I mean, if we say no to Him, would He still love us? Can I still be used by Him in other areas? Can I still have a relationship with Him if I say no to one of His requests?

Does God Want Me in Prison?

A friend was telling me about how she decided to homeschool her kids. Originally, it was something her husband wanted for their children. She started them when they were young, but she hated it. She continued because she wanted to be the good, Christian wife.

One night she had a dream. In the dream, she remembered telling her children that we were all in prison and we should make the best of it. To her, it was just a weird, random dream, but as she told her husband, he immediately said they could put the kids in public school.

Her obedience was creating a death inside her. She wanted to please her husband, but the life of duty was incredibly draining to her. Her husband finally saw what it was doing to her, and removed any burden coming from him. Do we think God would be less kind?

How Can I Say No to God?

God will always know what is best for us. That being said, He will wait for us to accept His offer. “He is patient with us not wanting any to perish” (2 Peter 3:9). “It is His kindness that leads us to repentance” (Romans 2:4). God is way more interested in our hearts than He is our obedience (Psalm 51:16-17).

Saying no to God seems like an impossible thing for a Christian. But, sometimes it is easier to turn off our hearts in obedience than to wrestle with God about things we don’t want to do. God prefers the wrestling to the deadness because the wrestling maintains the connection. He loves you completely and doesn’t want separation. Christ went to the cross to bring you to God (1 Peter 3:18).

If there is an area you want to say no to God about, tell Him about it. Tell Him why you are afraid or what you think may happen. Whatever you do, don’t allow it to turn off your connection with God. Allow Him to pour in His kindness and love. He loves you for you not just your obedience.

Praise GOD! I would like to thank you for these emails and I am making a point to always reading them.

Thank you so much for your continuing messages of encouragement.